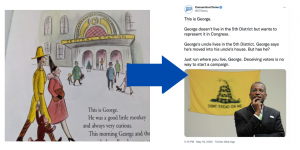 This is What Racism Looks Like. Democrats Compare George Logan to a Monkey.

by Kevin Rennie
as published on Daily Ructions on May 19.
Republicans are accusing state Democrats of comparing Fifth Congressional District nominee George Logan to a monkey. Logan, a two-term former state senator, to Curious George. the famous monkey of children’s books series. Democrats have made frequent references to where Logan lives. When the congressional reapportionment maps were adopted, Logan moved to Meriden from his home in the Third Congressional District.

The Wednesday tweet from the Connecticut Democrats’s Twitter account adopts the cadence of a Curious George story. Comparing Blacks to monkeys has long been a staple of racist dogma. It is “one of the oldest and most profoundly racist slanders in American history,” New York Times editorial board member Brett Staples wrote in a 2018 opinion piece.

Some children’s books have perpetuated the trope, according to Maya Terhune, who wrote of Curious George in a Boston College publication, “[T]he series’ celebration of the oppression of an abducted monkey parallels the oppression of black Americans.”

Democrats accused Republicans of trafficking in anti-semitism with a 2018 mailer aimed at state Senator Matt Lesser in his first campaign for the Senate. After a lethal hesitation, Lesser’s Republican opponent, Ed Charamut, apologized for the mailer postcard that, the New York Times reported, “featured a cartoonish illustration of…Matt Lesser, wide-eyed and clutching $100 bills in front of an exaggerated grin.” The mailer was widely condemned.

Now it is George Logan’s turn to feel the lash of racism in a campaign. Readers should ask themselves: What if Republicans had deployed this pernicious device to mock and wound Logan’s opponent, incumbent Jahana Hayes, who is also Black? What if they had taunted the 2016 national teacher of the year under the cover of Curious George, “You do not belong here. Go back to where you belong.” It would likely not have been the first time Logan and Hayes had had that racist command spewed at them. This should be the last.

Excerpt from the Rep-AM:

…The lines are similar to a Curious George book that feature the mischievous monkey who lives with a man with a yellow hat.

One of the book starts off with “This is George.”

“For a party that claims to be open and inclusive, this sort of distasteful tweet, which was also retweeted by Jahana Hayes, certainly comes off as racially charged,” Logan said in a statement on Thursday. “I won’t be deterred from the real issues that are impacting Americans while Democrats and Jahana Hayes play the race card.”

“Connecticut Dems owe George an apology and they need to take down the tweet and seriously consider whether the person who created the tweet should remain employed by them,” Proto said.

Hayes’ campaign spokesman did not return requests for comment about Logan’s move to Meriden nor about the Connecticut Democrats tweet. The state Democratic Party also did not respond.