August 9, 2022 — In a Congressional news briefing on August 8th, Connecticut Senator Dick Blumenthal claimed that “every person in CT will see lower costs” with the “Inflation Reduction Act.” 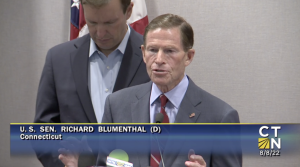 He celebrated the legislation and pretended that Democrats are working to reduce inflation. Does anyone really believe that the same party that brought us inflation intends to fix it all of a sudden?

Democrats deceivingly dubbed it the “Inflation Reduction Act,” but that couldn’t be further from the truth. In fact, the nonpartisan Congressional Budget Office said the bill would have a “negligible” effect on inflation. Here’s what the bill would really do:

As usual, Connecticut Democrats like Dick Blumenthal and Chris Murphy seek to score political points instead of helping CT families suffering from the effects of inflation.